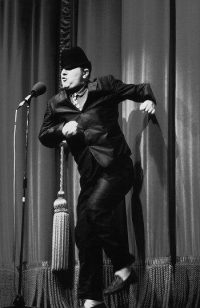 The Cost of Fitting In

He accompanied me on a run last week. Not in person, obviously, but via a podcast.

A founding father of alternative comedy in the 80s, this rotund Marxist blew away the working mens' club racist 'comedians' from the 70s with his surreal, raging energy. And always while wearing a tight suit.

But this was just a stage persona.

Alexei stepped back from stand up comedy in the 90s.

He talks about how playing this zany, off-the-scale version of himself took its toll.

He refused to meet his adoring fans after his stand up gigs on tour, not wanting to disappoint them with the real Alexei - just a considered, normal guy.

This is simply a celeb version of something that impacts many of us mortals.

Just as Alexei created a version of himself for his stage work, a work version of ourself will emerge as we adapt and evolve to our workplace.

Our personal traits and values are compromised as we seek to fit in to corporate life.

The gap between the two versions of ourself can cause a crisis of identity. I experienced this several times.

For Alexei, it resulted in him giving up stand up comedy for a decade.

What's the impact of the real you v the work you struggle having on you right now?